Massive 7.7 Earthquake Kills Over 200 People in Pakistan, Creates Island to Emerge From The Sea Off The Coast

Posted on September 25, 2013 by Conservatives Against Tyranny 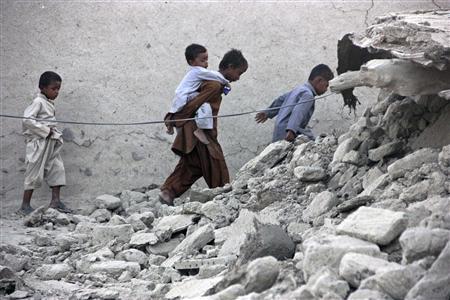 “The death toll from a powerful earthquake in Pakistan climbed to more than 230 on Wednesday after hundreds of mud houses collapsed on their inhabitants throughout the remote and thinly populated area, officials said.

Pakistan’s army airlifted hundreds of soldiers to help with the aftermath of the worst earthquake in the South Asian country since 2005 when about 75,000 people were killed in the north of the country.

The Tuesday earthquake, measuring 7.7 on the Richter scale, struck Baluchistan, a huge earthquake-prone province of deserts and rugged mountains, and was felt across South Asia.

It destroyed houses and cut communications with the worst affected district of Awaran, and was so powerful that it caused a small island to emerge from the sea just off the Pakistani coastline in the Arabian Sea.

“We have started to bury the dead,” Abdul Rasheed Gogazai, the deputy commissioner of Awaran, a town of 200,000, told Reuters by telephone from the affected area.

Jan Mohammad Bulaidi, a spokesman for the Baluch government, said at least 239 were killed and 400 injured.

It was hard for rescue teams to reach the area quickly because it is so remote, and some officials said the death toll was likely to rise as emergency workers progressed deeper into the mountains to assess the damage.

Mohammad Shabir, a journalist, described scenes of grief and chaos in villages, saying survivors were digging rows of graves and picking through the debris.

“As far as the human eye can see, all the houses here have been flattened,” he told Reuters from Awaran, adding that rescue teams were on the ground distributing supplies.

The earthquake struck Pakistan at a time when the country was still mourning the deaths of more than 80 Christians in a suicide bomb attack on an Anglican church in the city of Peshawar on Sunday.

To the south, on the beach near Gwadar port, crowds of bewildered residents gathered to witness the rare phenomenon of the island that the quake forced out of the sea.”

This entry was posted in Disasters and tagged Earthquakes,, Pakistan,. Bookmark the permalink.