Posted on September 12, 2013 by Conservatives Against Tyranny 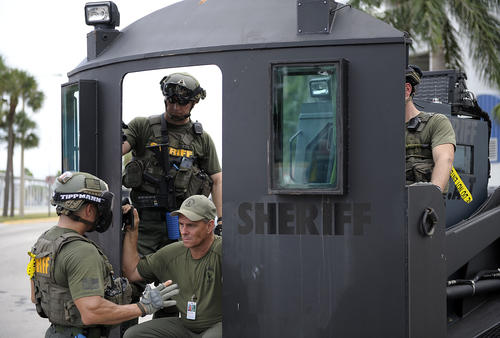 “Amid the explosions, smoke, roaring vehicles and chattering gunfire of a terrorist attack Thursday afternoon at Port Everglades, one fact became chillingly clear:

Of course it wasn’t a real terrorist attack, but rather a large-scale SWAT training exercise mounted by the Broward Sheriff’s Office involving boats, bus, bombs and booby-trapped hostages.

“This is really a worst case scenario,” said Saito, the SWAT team member who concocted the training storyline.

In Saito’s plot, seven “sovereign citizens,” or militia-styled revolutionaries who advocate the government’s overthrow, assault the port by boat. Their goal: steal a shipment of arms and ammunition transiting through the facility.

Initially thwarted by deputies, the terrorists seize hostages, wound a deputy, and leave a backpack full of explosives by Terminal 22. Then things get serious.

The terrorists strap bombs to the hostages, take over a bus, and engage in a full-blown gunfight with SWAT team members. The bad guys use paintball guns. The helmeted, body-armor-clad SWAT team responds with simulated ammo.

“It’s all about being prepared,” said SWAT chief Capt. Eddie Grant. “South Florida is a hot area, we have a stadium, two major ports. We have a lot of high-profile targets.”

Among agencies participating were the Fort Lauderdale Police SWAT team and U.S. Customs and Border Protection. The Coast Guard patrolled the waterway and FBI agents portrayed the terrorists.

The SWAT teams unleashed a full panoply of military-style armament. There were two Bears — massive armored vehicles with turrets for automatic weapons fire — a beefed up front-end loader that lifted an overturned car like a toy and Hummers packed with serious firepower. Machine guns stuttered, and paintball rounds spattered the armored cars.

“It gets your blood going,” Grant said.

“They enjoy being out here,” Saito said. “They look forward to the challenge.”

Team members navigated hallways and rooftops and charged a bus to free hostages. Red-shirted trainers rated their responses and briefed the troops afterward on what was done right and done wrong.

At the end, 12 hostages were rescued unharmed. “The hostages in this situation are most important,” Grant said. “We’ve got to be bullet magnets, that’s your job. Better you than the hostages.”

And the seven terrorists? They were, as Grant put it, “neutralized.”

This entry was posted in Police State and tagged Florida,, Sovereign Citizens,. Bookmark the permalink.