On the National Day of Prayer, Rhode Island Governor signs bill making it the 10th state to legalize gay marriage

Posted on May 3, 2013 by Conservatives Against Tyranny 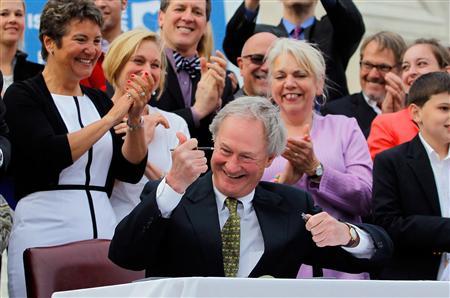 “Rhode Island lawmakers gave final approval to a bill to legalize gay marriage on Thursday, making it the 10th U.S. state to extend marriage rights to same-sex couples and the last of the six New England states to do so.

Governor Lincoln Chafee, an independent, signed the bill into law almost immediately after the vote on Thursday. The new law will take effect on August 1.

Last week, the Democratic-led state Senate approved the measure with the support of the entire Republican caucus. The state House had approved a similar bill in January and on Thursday approved the Senate’s amended bill.

Despite the victory, some in the state continued to voice strong opposition.

The vote marks the latest in a string of victories for gay marriage advocates. Last November, voters in Maine, Maryland and Washington state approved same-sex marriage, while in Minnesota, voters rejected a constitutional amendment that would have defined marriage as a union between a man and a woman.

Before that point, advocates of same-sex marriage had never been successful at the ballot box, and voters in more than two dozen states had approved constitutional amendments defining marriage as a union between a man and a woman.

Lawmakers in Illinois, Delaware and Minnesota have joined Rhode Island in taking up same-sex marriage legislation this year. In Delaware, the bill has passed the state’s lower house and is scheduled for a vote in the upper house on May 7.

New Jersey Democrats, meanwhile, have until next January to attempt to override Governor Chris Christie’s veto of a same-sex marriage bill in that state.

“Lincoln Chafee is now calling on fellow governors to push for similar legislation to what passed in Rhode Island on Thursday, and calling for the Supreme Court to overturn the Defense of Marriage Act. Though public opinion continues to turn in favor of same-sex marriage, legalizing it is still a heavy lift for many states.”

“The Rhode Island chapter of the National Organization for Marriage has denounced the General Assembly’s passage of legislation allowing same-sex couples to marry in Rhode Island.

“Redefining marriage into a genderless institution to satisfy the demands of a small but politically powerful group is short-sighted policy that fails to take into account the rights and needs of the generations to come,” said Christopher Plante, regional director of NOM Rhode Island.

“Children deserve to know and be cared for by a mom and dad,” Plante said. “This law will intentionally deny children one or the other. “The full impact may not be seen next week or next year, but our children will be the ones who pay the price for this decision.”

“Without robust legal protections to allow these faithful people and groups to maintain fidelity in the public square to their religious beliefs, we’re likely to see a raft of lawsuits and governmental action such as license revocations, fines and denial of governmental contracts to these faith-based groups and individuals.”

“Brian Brown, president of the National Organization for Marriage, denies there is a national tide in support of marriage rights for gay couples.

“I don’t know that I would say Rhode Island is a trend,” Brown said, also questioning victories for supporters of gay-marriage initiatives in Maine, Maryland and Washington State last November. “Again, we’re talking about states that are not necessarily indicative of the rest of the country. These are pretty deep-blue, liberal states we’re talking about.”

Even so, Brown, the head of the leading national organization opposing same-sex marriage, finds himself playing defense as more Americans support same-sex marriage and more state legislatures debate measures authorizing it. In an interview on Capital Download, a weekly video series on usatoday.com, Brown blasted “cultural elites” for demonizing supporters of traditional marriage and warned Republican officeholders of the perils of supporting same-sex marriage proposals.”

This entry was posted in Days of Noah and Lot. Bookmark the permalink.