Zimbabwe votes on curbs to president’s power, why can’t America do the same?

Posted on March 16, 2013 by Conservatives Against Tyranny 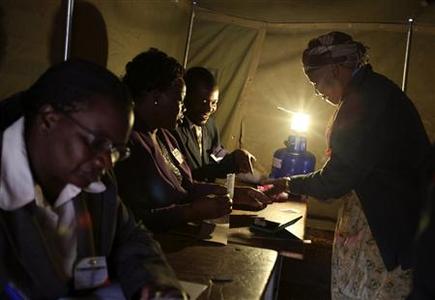 “Zimbabweans voted on Saturday in a referendum expected to endorse a new constitution that would trim presidential powers and pave the way for an election to decide whether Robert Mugabe extends his three-decade rule.

Mugabe, Africa’s oldest president at 89, has ruled the former British colony since independence in 1980 and has been accused of waging violent crackdowns on the opposition and weakening state institutions like the cabinet and parliament.

The new constitution would set a maximum two five-year terms for the president, starting with the next election, expected in the second half of this year. But the limit will not apply retroactively, so Mugabe could rule for another two terms.

Presidential decrees will also require majority backing in the cabinet, and declarations of emergency rule or dissolutions of parliament will need the approval of two-thirds of lawmakers, changes that will take effect after the next election.

Voting ended at 11.00 a.m. ET at the nearly 10,000 polling stations across the southern African nation, with results to be announced within five days, said Rita Makarau, head of the Zimbabwe Electoral Commission.”

This entry was posted in Africa. Bookmark the permalink.