Posted on March 11, 2013 by Conservatives Against Tyranny 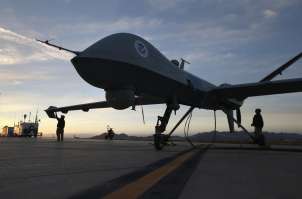 The bill isn’t strong enough. It would actually be better if the bill just banned the use of drones altogether. The bill still states that there’s cases where drones can target people and collect data on them including Facial recognition or other biometric matching technology.

An important part of the bill, though, states: “An unmanned aerial vehicle shall not be equipped with weapons.” Contact your Arkansas state lawmakers and tell them about the bill and that you don’t want drones used on American soil!

Text of the bill:

SECTION 1. Arkansas Code Title is amended to add a new chapter to read as follows:

12-19-102. Definitions. As used in this chapter, “unmanned aerial vehicle” means an aircraft that is operated without direct human intervention from within or on the aircraft.

12-19-105. Data Retention.
(a)(1) Data collected on an individual, home, or area other than the target that justified deployment shall not be used, copied, or disclosed for any purpose.
(2) Data of this nature shall be deleted as soon as possible, and in no event later than twenty-four (24) hours after collection.
(b) If a local law enforcement agency uses an unmanned aerial vehicle, information acquired and evidence derived from its use shall not be received in evidence in any trial, hearing, or other proceeding in or before any court, grand jury, department, officer, agency, regulatory body, legislative committee, or other authority of the state or a political subdivision thereof if the disclosure of that information would be in violation of this chapter.